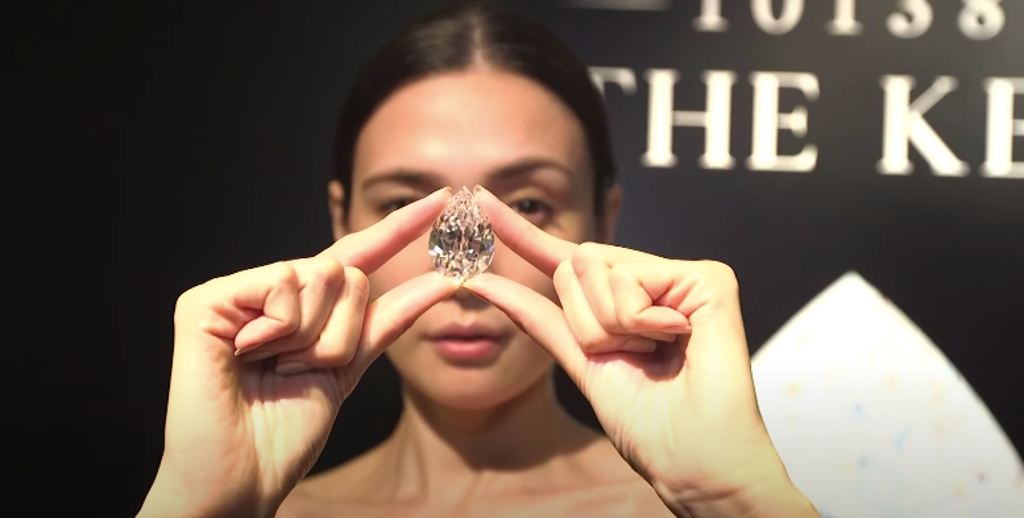 A rare 101.38-carat diamond was purchased by a private collector for $12.3 million (£8.8 million) at a Sotheby’s auction using cryptocurrency, the auction house said.

The sale “marks the latest milestone in the adoption of cryptocurrency”, Sotheby’s said in an Instagram post on Saturday.

The auction house’s Hong Kong division said last month that it will accept cryptocurrency as a form of payment for the “exceptional 101.38-carat pear-shaped D flawless diamond… one of the earth’s rarest and greatest treasures.”

It said it payment in Bitcoin and Ethereum would be accepted, but did not reveal which cryptocurrency was ultimately used by the mystery buyer to purchase the diamond.

“No other physical object with an estimate even approaching the $10-15m estimate this diamond carries, has ever been publicly offered for purchase with cryptocurrency (sic),” the auction house said.

The sale was a “truly symbolic moment”, according to Wenhao Yu, the deputy chairman of Sotheby’s jewellery in Asia.

“The most ancient and emblematic denominator of value can now, for the first time, be purchased using humanity’s newest universal currency. Never was there a better moment to bring a world-class diamond such as this to the market,” he said.

The diamond, called “The Key 10138” is the second-largest pear-shaped diamond to appear on the public market, according to the auction house. The rare diamond came from the diamond company Diacore.

Sotheby’s said the shape of the diamond is also significant.

“Many of the most important diamonds in history are pear-shaped, including those of royal provenance,” said a spokesperson, referring to the Cullinan I diamond, also known as “the Great Star of Africa”, that is currently kept inside the Tower of London.

The auction house also said that the diamond was “rare in its own right” and that “the stone is the second largest pear-shaped diamond ever to come to market.”

Mr Wenhao said the sale has attracted “new clients well beyond the traditional pool of collectors,” adding that cryptocurrency purchases appeal to a digitally savvy generation.

In May this year, Sotheby’s accepted $12.9m in cryptocurrency for a piece of art by Banksy titled “Love Is In The Air.”

Christie’s, another auction house, announced in June that it would accept Bitcoin and Ethereum for an untitled work by American artist Keith Haring. The painting ultimately sold for $6m.

Teller Finance, a non-collateral lending protocol for the DeFi market, has officially deployed its mainnet on Polygon, marking a significant milestone in its quest...
Bitcoin

Crypto Finance News is the place to get all the latest news and prices for cryptocurrency. Whether you are just getting involved or a seasoned investor, you'll find all the information you need.